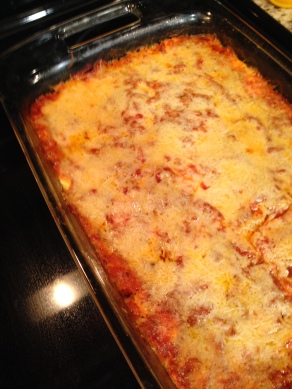 So many of you Eaters “liked” and commented on the spaghetti squash casserole recipe I posted on Instagram and Facebook, that I had to include it as a blog post, so we can all reference it easily next time we need it. The recipe was written on the BellsBestBerries Blog post because they are the pesticide free CSA, who grew the spaghetti squash.

Here are my tips on this: it was actually better the second day, so don’t be afraid of cooking it early and then reheating it. I cooked it with aluminum foil on top, but I do not think I will next time. Some of the water from the squash probably needed to evaporate during cooking and that process may be easier if the wrap is left off. Also, I like my cheesy casserole dishes to be a bit crunchy on the edges, so removing tin foil might help that to happen. Just keep an eye on it while cooking if you don’t use the foil.  I used 1 small to med squash to fill a 9×13 pan with plenty of squash for all 4 of my family members to eat, as the main course of a meal. It would be fine to cook the squash the night before, so the “noodles” are prepped and ready to go when you want to bake this. Go to this site to get the recipe, but leave comments or questions here on this OE post, and I will try to help.

As always, use as many organic or pesticide free ingredients as possible!

For those who know us, you knew it couldn’t be long before I posted some kind of Mexican recipe! Well, here ya go. My gift to you, dear fans of the taco in any form. Let’s call it Mexican Lasagna, Organic Eater style, or OMG for short:) 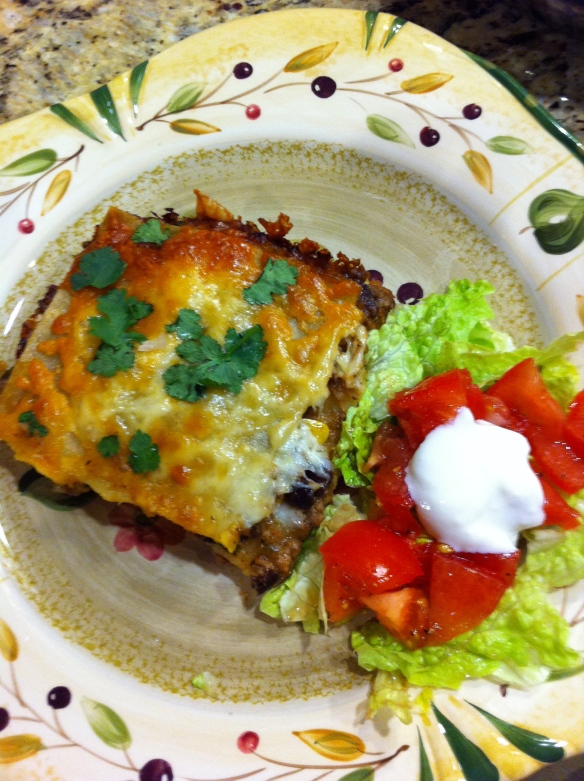 This was one of my first attempts at taking a “regular” recipe and making it Organic Eater approved. And si, it was wildly successful! Ole! My family is crizazy about Mexican, to the point that Hubs has been nicknamed “Taco” by those who know him best. See picture below. We love chips & salsa so much, we take pictures of it when we eat out. Sad but true.

Cutting out chips and taco shells has been the hardest part of cutting grains from our diet, but we’re finding ways to substitute or cut back. Here is the link to the original recipe called “Cheesy Enchilada Casserole” at GetOffYourButtandBake. Yep, that’s the website’s real name!  I suggest going there to print the original, then use my notes on how to make it OE approved. And btw, it was voted #1 Casserole at Taste of Home, so you know it’s gonna freakin rock!

Use grassfed beef (if you are in Charlotte and need a local source, leave a comment)

I used the Pineapple Salsa from Trader Joes (if you are on Advanced plan diet, the pineapple makes this off limits to you) but you can make your own salsa in the blender. I had time restraints or I would have.

I used fresh cooked (from dried beans) black beans. I try to use as few canned goods as possible since the lining is coated with BPA (except for a few brands like Eden Organics).

I could not find an acceptable organic Italian Dressing when I was shopping, so I just added olive oil, crushed garlic, and italian seasonings.

I used Trader Joes soft CORN tortillas (no wheat in them, so gluten free) but you could make coconut flour tortillas instead, to be grain free. Just don’t use wheat or any brands that have lots of ingredients, which will be difficult to find unless you go to a health food store. If you cannot find or make wheat-free, you could use Ezekiel brand sprouted wheat tortillas as a third option. They’re better than the chemical ingredient loaded processed flour ones (Good, better best always)

I used frozen organic corn instead of canned. You can delete this to comply with Advanced Plan.

I used plain whole fat organic yogurt instead of organic sour cream (only because that’s what I had on hand) Delicious substitute! And hopefully it added some probiotics, which would be awesome.

I used raw milk cheddar cheese from Trader Joes, but if you cannot find raw, you could at least use no hormone cheese. Cabot, found at most groceries, is my go to brand when I cannot buy organic. Do not buy the bagged cheese that has added ingredients to keep it from caking. Buy the block of white (no orange color added) cheddar and grate it yourself.

I added fresh cilantro to the meat mixture and added more on top when the casserole came out of the oven. Benefits of cilantro. It’s amazing! We add plenty of it to every Mexican dish we make now!

I used a 3Qt rectangular glass Pyrex dish because I didn’t want lots of “layers” of corn shells. I ended up with 2 layers of shells this way, which made it acceptable, but don’t go crazy eating seconds and thirds…. you know you’re gonna wanna, it’s that good! I think you could easily get away with only 1 layer of shells, which I will try next time.

Lastly, “Taco”, I mean Hubs, likes his cheese a little crunchy on the edges, so I did NOT cover with tin foil until the last 10-15 mins of baking. And we used yogurt as the sour cream on top of the lettuce and tomatoes added at the end. 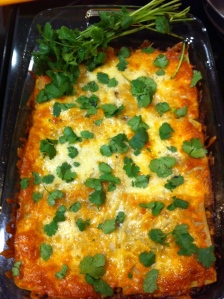 I did as the original recipe suggested, and cut my shells into squares, and fried the cut off edges in coconut oil and topped with a sugar substitute and cinnamon. Yummy!

KEEP IN MIND this is not grain-free food unless you make it with coconut flour tortillas and delete the corn in the meat mixture. I considered this a “treat” meal on the weekend, so I left the corn in mine (80/20 rule). Go HEAVY on the organic lettuce and tomatoes on top, and go lighter on the serving of casserole underneath. Or, ditch the shells and put the meat mixture on a salad. It was absolutely delicious before I ever put it in the dish with the shells. The original also suggested crushing msg covered, fake orange-colored Doritos on this. Good grief.  I implore you not to do that!:) Please don’t tell me if you do.

Enjoy my amigos!! You can thank me later, go make this!!!!

Remember you can always cut my commentary and print just the necessary items using the “Print Friendly” button. I know this is an extra long one, so cut the fluff. Who wants 20 page recipes anyway?! not me!

Error: Twitter did not respond. Please wait a few minutes and refresh this page.

Blogs I love and spend too much time on...